Join Us On WhatsApp

KJ to be a host for Katy Perry and Dua Lipa

If you know about the best-selling music artist Katy Perry one will surely rejoice her presence in Mumbai this weekend. To make this weekend special for the Mumbaites, Katy Perry will be coming to India this week to hum along for the Mumbaites on November 16th. Katy will arrive India coupled with Dua Lipa for the music fest. But some reports that were revealed states, before hte music festival, Karan Johar will be hosting a party for the duo. Who do not know his bigwig gatherings that are extravagant? This time for the duo, Katy Perry and Dua Lipa Karan Johar will be organising an astounding cocktail party and marvellous and relishing dinner for the Hollywood guests. Hosting a party is nothing new for Karan Johar. He also was highlighted for throwing a party for few other Hollywood guests like Will Smith and director Darren Aronofsky earlier. Katy also had visited India earlier for the opening ceremony of T20 League in the year 2012 in Chennai. The previous visit was in 2009 when she planned for a visit to Taj Mahal where Russel Brand propsed her adn follwe by their wedding in the Blue City, Rajasthan. Though the couple split after two years, their wedding was happened in India. 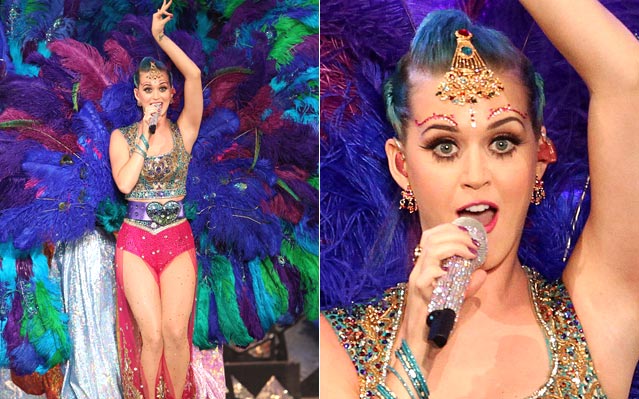 Katy sharing stage with Dua Lipa for her first performance in Mumbai she is looking forward to sing here and her recent release of Harleys in Hawaii has got more than 14 million views on the YouTube. Also Dua Lipa, this English pop star will grace her presence with her recent released song New Rules in the event. Reposrrts revealed that other celebrities like Amit Trivedi, Ritviz and The Local Train among others will be attending the event. Janhvi was offered 3.5 crores for her debut in Tollywood

Janhvi is splitting image of Sridevi in Chnadini’s look